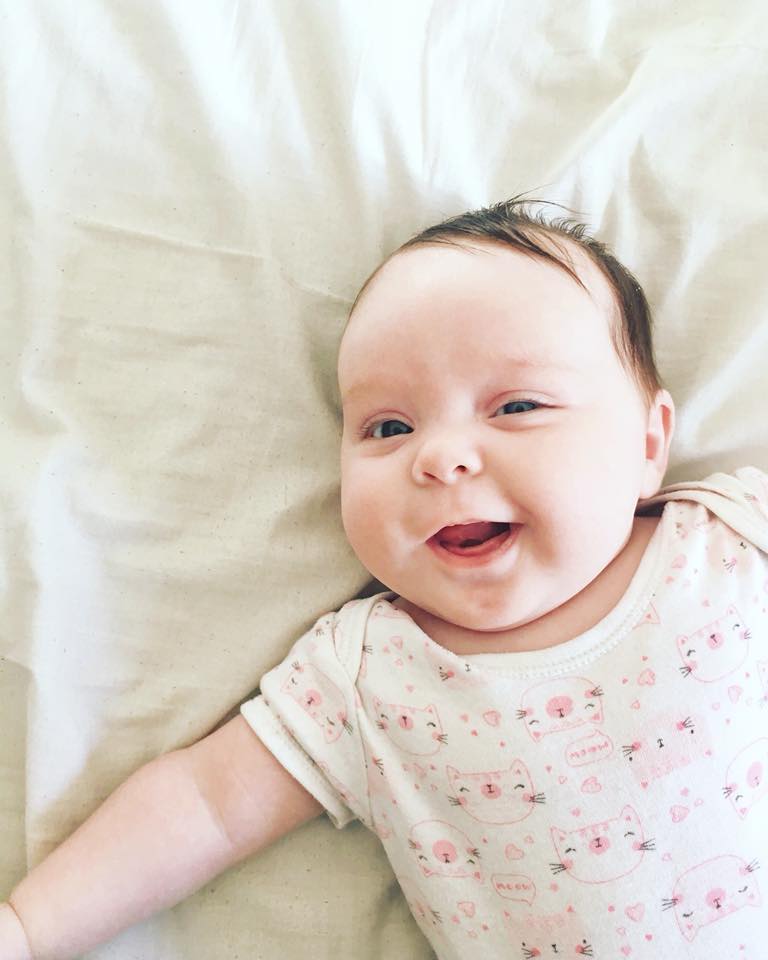 Another month flown by, it really makes you think about how fast time flies and how short life is. I’ve been really thinking about how I want to cherish every moment. I want to be able to give Lily all the things I couldn’t have as a child. We weren’t very well off at all so I missed out on a lot of things, school trips, holidays, I’ve never even been to a theme park.

At the moment obviously theres no point taking her somewhere like that but as she’s getting older each day I can see her getting stronger, trying to sit up and gurgle at me. I just want her to experience the world and do whatever she wants. The last month has been good and bad. Around 9 weeks I saw two teeth buds starting to a appear and by 11 weeks there were 4 quite obviously there. They still haven’t cut through but you can tell sometimes they are playing her up. She just wants to cuddle all the time, chews her hand and if she holds your finger it goes straight in the mouth to be sucked and chewed on.

Another adorable addition to her ever-growing little Lily personality is how extremely happy she is to see you when she wakes up in the morning. She starts to wriggle, I can hear her tossing and kicking her legs, my eyes slowly open thinking please don’t be the middle of the night. Normally she sleeps through and wakes about 6am when Scott’s alarm goes off for work but very rarely she will get up about 4 for a feed then sleep til about 9am. As soon as I sit up and say “Good Morning” is a slightly higher pitched voice, that smile just grows across her face and she lights up. It’s such a nice feeling having someone be so happy to see me although I probably look like I’ve been dragged through a hedge backwards, messy hair and no make up. She doesn’t care, she just wants milk and cuddles with you.

One of the unexpected things was the first overflowing poo. I managed nearly 3 months without one but alas it has happened. We were just sitting on the bed playing with her on a Sunday morning, making her giggle and then you heard it. We took her to the changing mat and it seemed to just leak out, everywhere. It was certainly a two man job, she was giggling after and thought it was funny. Straight in the bath for the little monster.


Weight – 12lb5
Clothes – 3-6 (although some of the bodysuits are too big, she’s like in the awkward middle sizing)
Feed – Still drinks normally 6oz per feed
Favourite thing – Her playmat still and a baby sensory video of dots (she gets frustrated if you turn it off now sometimes)